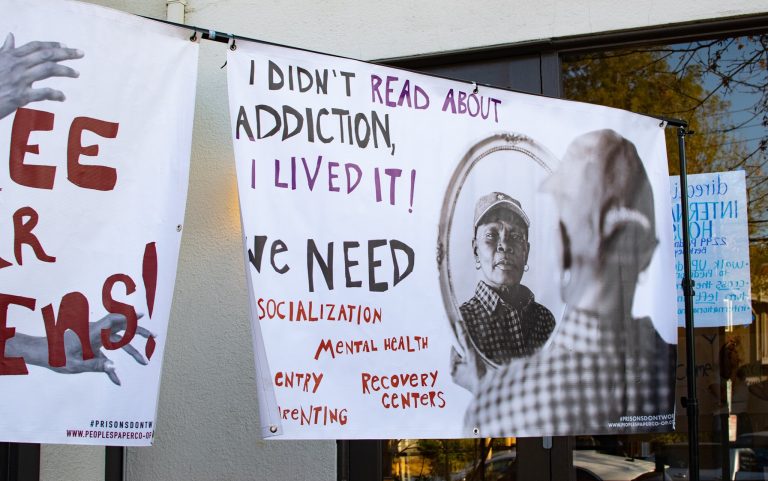 In November 2019 Psychologists for Social Responsibility (PsySR) had a wonderful conference at the Wright Institute in Berkeley California, in partnership with the Wright Institute’s office of Diversity, Equity, and Inclusion. The topic for the entire conference was mass incarceration. It was led by our current president, Daniela Kantorová, and her amazing team of students and colleagues. Such a conference today, in the time of the COVID-19 crisis, would almost be unthinkable. Yet the truths spoken at the conference are only more true, as the virus is sweeping through our jails, prisons and detention centers, causing deaths, and putting the vulnerable at risk.

The conference was an amazing mix of people. Roughly 1/3, the formerly incarcerated, who had been severely impacted by the criminal justice system; 1/3 community activists who have been fighting for those impacted by the system; 1/3rd psychological professionals/academics. The diversity of attendees was as beautiful as their uniformly critical worldviews. All believed there was need for many reforms. Most agreed that so much of these systems of structural violence are best off abolished.

We heard heartbreaking stories of systemic abuse from those with experience inside this system. We heard stories of their many brave peers on the inside risking their lives for each other. We were inspired by art that was incorporated throughout the conference. We heard about the indifference, irrelevance, and bystanding of psychologists on the inside. One panelist, a health professional, who used to work inside a prison, did describe her epiphany when she understood she could no longer try to good within the system, and instead had to fight its injustices from without.

One overarching theme was our need to reframe the colonial narrative of the “criminal justice” system. The patterns of power in those who run our prisons are often criminal, and the outcomes too frequently fail to be about “justice”. We talk too much of a need for “public safety” when what we are watching is the “militarization of police” in service of social control. Every part of these punitive systems could be more effectively replaced if humanistic goals were the real aim. If rehabilitation was really the aim, if the goals were humanistic, most of the system could be replaced with more empowering, liberating, and critical lenses.

The language of the dominant, colonizing narrative is so deeply impressed upon us it is difficult to avoid its trappings. We have to be more vigilant about if we are to literally and figuratively help people break free.

We need to become more adept at using our psychological tools toward those who drive every punitive aspect of the system. We need to pay attention to the whole continuum: unhelpful schools, law enforcement, courts, the regressive intervention of detention itself, and surveillance and restrictions upon release. We need to help push oppressors through their own fears and ignorance toward better enlightenment or to be held accountable for their intractability. We need to help the public filled with stereotypes about the incarcerated, the devastating effects of this system, particularly in the time of coronavirus.

The panelists and attendees called for us building alternative models of mass protest. And in this time of social distancing, we had better harness our energies through virtual meetings, social media and creative mutual aid efforts when we cannot safely occupy real space. We will invent new ways to stand our ground and make our points made–to hold structural violence accountable.

Reframing also requires us to redefine our own personals fears. We need to better support the formerly incarcerated to lead the movement and welcome them in PsySR. When formerly incarcerated panelists were asked directly for one example of how an in-prison mental health professional helped them on the inside, no panel member had a positive instance to give at first. Eventually a man told about a time when a psychologist broke a rule and snuck him a prison complaint form.

Another said, “Honestly, when I’m incarcerated, I cannot trust the mental health person.” We all know how important trust and a sense of safety is important to therapeutic work. He said, “What I share can be used against me. I can just be feeling depressed, try to seek some help. And what I share will be used against me in a parole hearing. There is no hope in this scenario.”

The unjust structures are driven by capitalism and racism. One other panelist told us about how deep privatization penetrated the operations. Another pointed to the racism: “For older white prisoners you get cabinetmaking. For those of us color it is separation solitary confinement. The lines are blatant and obvious.”

There was much talk of torture-related implications of the structural violence of the U.S. carceral system. There was talk among attendees about the system’s movement toward psychological and cultural genocide. One of the other key partners in organizing the conference was Terry Kupers, a Bay Area psychiatrist, Wright Institute professor emeritus, author, activist, and generally kind heart. Terry has engaged in a decades long and vibrant struggle against solitary confinement. To the question of “Is the current criminal justice system a success? Terry had much to say. According to my notes and paraphrasing, he said, “The criminal justice system is a great success. All across the board. Our public schools are not failing. They are succeeding though their main goals are not to educate. To the extent the school and criminal justice system is to stratify people into winners and losers, they are a great success. The trick is to make those who do not receive the winner’s prize is to get them think they are too stupid to be in school. The same is true of the criminal justice system. It is successful in getting women and men to blame themselves for the bad things that happen there. The goal is to make the unjust rules invisible. The goal is to get people to not look up at those unjust rules.”

The current spread of disease and death in these total institutions reveals a microcosm of all our societal failures. For a long time, the coronavirus will escalate the ways structural forms of violence will harm the most vulnerable. Our current COVID19 lockdowns can lead us to desire to return to the normality of the past. Let’s not forget that “normal” was and is highly problematic. Let’s seize this crisis to help people realize there are better alternatives. Beyond abolishing the criminal, violent structures within society we will need wholly different social arrangements and transformative justice.
In the meantime, what are other actions we can take now? We can accompany, express solidarity, and make enough noise on the outside it is heard by detainees within the prison. One last message: One of the panels of formerly incarcerated leaders were asked: “What can psychologists do to help?” The answers were not at all for more programs or therapy. The most common theme was for us to fight for them from the outside. They said, when incarcerated people , amid all their tribulations and pain, hear about intellectuals acting in protest on the outside, hope is renewed. We need to take their lead and make some noise. Now more than ever.
Brad Olson, Ph.D.
Treasurer
Psychologists for Social Responsibility