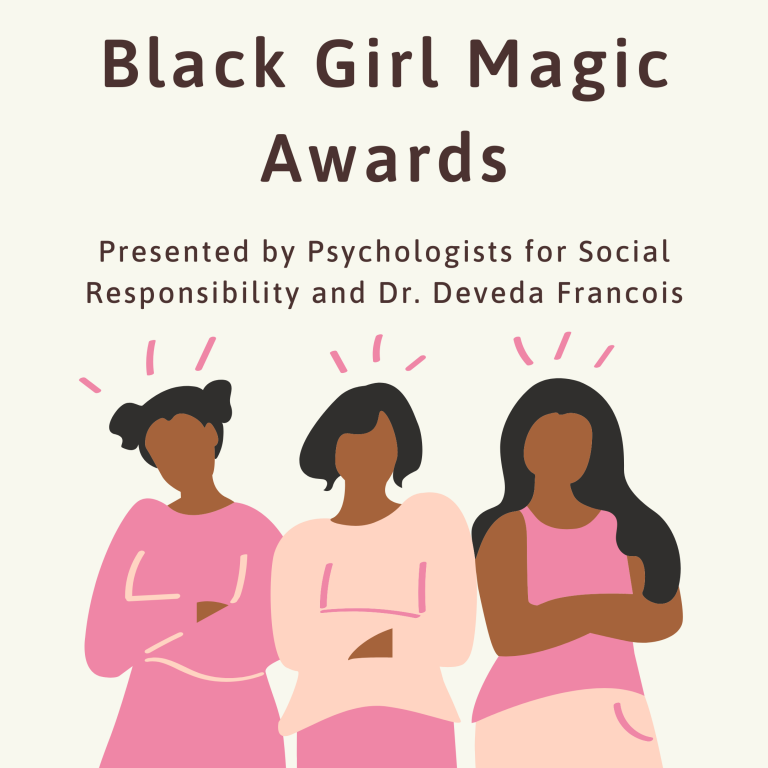 Dr. Deveda Francois and Psychologists for Social Responsibility partner to present this award to Black women who are actively involved in research and action that contribute to the well-being, education, and advancement of Black women and girls.

A total of four  awards are presented on a yearly basis.

Dr. Stacey Ault is an Assistant Professor in the Social Work division at Sacramento State University. She has over 20 years experience working alongside youth and communities in the Sacramento region. In 2016 Dr. Ault founded The Race and Gender Equity (RAGE) Project 501(c)3, a company that provides consulting, life/leadership coaching and community support to individuals and organizations fighting for liberation. As Youth Development Director at Sacramento City Unified School District, Dr. Ault’s leadership resulted in statewide and national recognition in areas of equity, expanded learning, youth voice, social justice and programming for students of color.

Dr. Ault earned her Master’s in Social Work at Sac State and her Doctorate in International and Multicultural Education/Human Rights Education from the University of San Francisco. Her research explores Critical Post Traumatic Growth among Black women and girls. Dr. Ault is also interested in exploring issues related to anti-Blackness, and how systemic violence impacts young people, especially those impacted by gang violence and Commercial Sexual Exploitation. She uses community and youth participatory action research methodologies to uplift voices, share narratives, and engage in the development of new knowledge that will ultimately be used to dismantle racial and gender inequities.

Asantewaa Boykin is co-founder of the Anti Police Terror Project (APTP), a Black-led, mutiracial , intergenerational coalition that seeks to build a replicable and sustainable model to eradicate police terror in the fight for justice, documenting police abuses and conecting impacted families and communities with resorce, legal referrals, and opportunities for healing (https://www.antipoliceterrorproject.org/about)

Asantewaa is the Program Coordinator for Mental Health First (MH First) , a project of APTP that started in 2020.  MH First  is a model for non-police responses to mental health crises. As stated on the MH First Facebook page: Our purpose is to interrupt and eliminate the need for law enforcement in mental health crisis first response by providing mobile peer support, de-escalation assistance, and non-punitive and life-affirming interventions, therefore decriminalizing emotional and psychological crises and decreasing the stigma around mental health, substance use, and domestic violence, while also addressing their root causes: white supremacy, capitalism, and colonialism.

As a native of the South Side of Chicago and a Greater Roseland community member, Vanessa Goodar is using her voice to highlight the importance of supporting Black-owned businesses and investing in Chicago’s southside in Chicago’s Invest South/West Roseland Roundtable.

Vanessa believes through the arts, shared identity and culture, community members can connect and empower each other to drive community development  that revitalizes neighborhoods without gentrification. She hopes to utilize her love of helping others, classroom experiences and community psychology empirical research to create a sustainable future for Chicago’s far south side Chicago communities. In the midst of a health and racial syndemic, Vanessa hopes to concentrate on expanding community wellness, community commerce and culturally-centered educational opportunities for Black women and girls to redefine what strength, wellness and prosperity look like on Chicago’s south side.

Working at the intersection of culture, community service and education, Vanessa spent her time at Western Illinois University serving as Vice President of the Zeta Iota Chapter of Alpha Kappa Alpha Sorority, Incorporated. She earned a B.S. in Fashion Merchandising and Music Business in 2006 before attending National-Louis University (NLU) and earning a Master’s in Teaching in 2011. Vanessa is currently pursuing her PhD in Community Psychology at NLU.

Nicole Vaughn is a lifelong resident of Chicago’s Englewood neighborhood. Nicole worked in Englewood Cure Violence (formerly Ceasefire) to end senseless shootings and killings that plagued the neighborhodd. She is currently the leadorganizer in Englewood to end mass incarceration.

In 2016, Nicole ran for political office, State Representative in the 6th legislative district. She was unsuccessful in winning her election but was very proud of garnishing over 20% of the vote which equated to over 4,700 votes. The real victory was running a grassroots campaign and the residents in the 6th district believed in her mission to change the status quo.

Nicole may be most proud of restoring the historic Englewood Back to School Parade in 2014. The Parade is truly a gem and has been a part of the community for 59 years. She was able to bring organizations and families back together to continue a great tradition. It is her belief that this event will help revitalize hope and restore the sense of community and pride that once existed in the Englewood community. Through her leadership, the parade in 2014-2019 had over 6,000 attendees. At the parades, over 5,000 bags of school supplies were given away, there was free food and drinks, free haircuts, fun activities and other giveaways. Nicole desires to pursue entrepreneurship in her community in efforts to make an even greater impact. But more than anything, Nicole is a proud resident of Englewood.